How to Find a UFC Stream and Watch it Securely

UFC fights for 2019 officially kicked off on January 19 with UFC Fight Night 143 (Cejudo vs Dillashaw). The fight was the promotion’s inaugural event on ESPN, after the sports television channel took over the UFC broadcasting and digital rights from Fox Sports. This means that the majority of UFC fights for the next five […]

UFC fights for 2019 officially kicked off on January 19 with UFC Fight Night 143 (Cejudo vs Dillashaw). The fight was the promotion’s inaugural event on ESPN, after the sports television channel took over the UFC broadcasting and digital rights from Fox Sports. This means that the majority of UFC fights for the next five years can be seen only on ESPN, ESPN+ and its affiliated platforms, while all fights will still be available on UFC Fight Pass (or not, as we will discuss later).

Damn ESPN and UFC getting the big names pic.twitter.com/IOKOdH9LYG

Aside from the change of channel where you can watch UFC, not much has really changed. You still need to purchase pay-per-view and fight pass subscriptions in order to watch major fight night cards. Thankfully, there are ways to stream UFC for free, and we will teach you how to do it securely with a VPN.

Where to stream UFC for free

No matter which big shot sports channel holds the UFC broadcasting rights, the fact remains that fans will need to pay in order to watch most of its major fights. To access sports events on ESPN+, you need to pay $5 per month. Then there are pay-per-view subscriptions at $64.99 per match.

If you are a mixed martial arts fan though, we’re sure you’ve explored free UFC streaming options. These sites may be loaded with ads, and some may have low-quality videos, but they give you access to the live action for free, and that’s all that matters.

You can watch live UFC fights on Online WWE which is a website created for wrestling fans.

Most of the contents available on the website are dedicated to WWE but there are pages for other wrestling promotions like GFW, Lucha Underground, and ROH.

Wrestling Online Matches offers contents the same as that of Online WWE. Most of them are of wrestling promotions such as WWE, ROH, and GFW.

Aside from live matches, you also get to access past UFC fights.

VIP League is a one-stop resource for all sporting events. Aside from UFC, you can watch football, rugby, tennis, baseball, golf, boxing, and even horse racing and darts on VIP League. The site has been up since 2014, and you can also access TV shows on it.

You first have to add a browser extension called MyVideoTab so you can access the videos.

If you’re using Kodi, you can install add-ons such as Planet MMA and other Kodi sports addons so you can watch UFC for free on. Planet MMA is by far the most downloaded and the most popular Kodi addon for UFC, so here’s how you install it. Installing other addons will generally follow the same instructions:

Yes, there are a few steps involved, but Kodi is a wonderful tool for watching MMA!

MMA Mania is a source of the latest news and updates about UFC and other mixed martial arts promotions since 2005.

Although it doesn’t give you live videos of UFC fights, the site does provide live play by play updates. MMA Mania is even a great source for, UFC gossip.

A great match for any of the options above is a VPN which enables you to stream UFC fights securely. The best VPN provider will solve these two issues you might encounter when you want to stream UFC for free:

With a VPN, your ISP, UFC, and ESPN (or anyone with prying eyes) won’t see your online activities. They won’t see what you’re watching on any website because the VPN enables all your traffic to go through an encrypted tunnel. It covers your UFC streaming and all other things you do on the Internet.

A VPN will solve that problem real quick and turn all those grey ESPN boxes to a red watch button.

A VPN also allows you to access the fights even when you go to a country where UFC isn’t available. Installing a Kodi addon, for example, won’t guarantee that you will get to watch UFC. If the fight is restricted in your location, then you won’t be able to watch it unless you get a VPN for Kodi. Here are two VPNs we recommend for Kodi:

VPNs are particularly useful when you have already paid for a Fight Pass, but a particular fight night card is blocked because UFC has a TV deal in your country. Fight Pass users learned this the hard way:

So even if you are from the US and a fight night card is available on ESPN, you won’t be able to watch it on UFC Fight Pass. If you are in the UK and the match is exclusively shown on BT Sports, then your Fight Pass subscription is worthless. Unless, of course, you connect to a VPN server located in a country where it’s not blocked. We hope these UFC fans have figured this out.

@UFCFightPass would love to pay for fight pass to watch ufc229 but YOU block it here in the UK due to btsport. My TV provider is SKY #slowhandclap

@UFCFightPass I buy FIGHTPASS, and live in Canada. You still block me like every other event. Why do you make it hard for fans to watch?

They all needed a good streaming VPN to get around these geo blocks. Here are two that our team recommends for the job:

If you don’t have cable TV, you can still watch UFC on any of these paid platforms. Before we go further, check out this tip from a wrestling fan:

I hate giving UFC any money, so give them as little as possible. Connect to an Asian VPN (I used Singapore). Then order the PPV at https://t.co/tMttMZUEay. It will be $24.99. pic.twitter.com/sVKxGKw31p

Aside from bypassing geo restrictions and protecting your privacy, A VPN can help you save money on any of the platforms we listed below. You’re welcome.

You can watch UFC on ESPN+ for $5 a month. This will also give you access to live broadcasts of other sports events.

Sling TV is a streaming platform that offers a lot of channels, including ESPN channels. There are three bundles to choose from:

Hulu is popular as an on-demand video streaming platform, but it also offers one bundle with Live TV at $39.99 per month. This bundle gives you access to ESPN channels and you can add other premium channels at an additional cost. 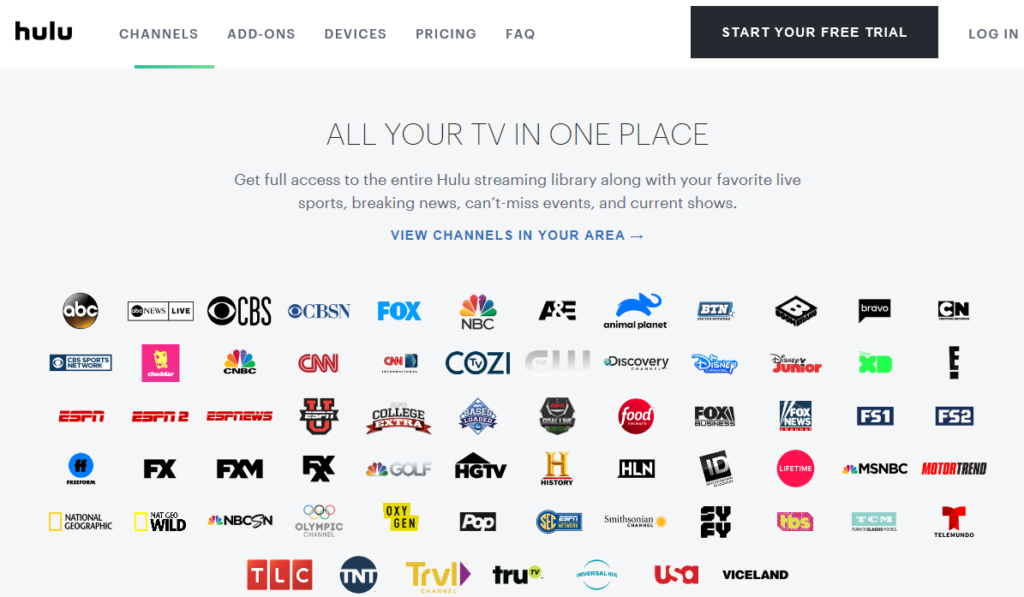 DirectTV Now gives you several options. They have five bundles to choose from, and the main ESPN channels are available in all of them.

These bundles differ in the number and type of channels that are accessible. You can also add premium channels and DirectTV Now also has international bundles. Since you’re only looking for ESPN to watch UFC, any of the five bundles above will do.

Any of these bundles will give you your UFC fix since they all have ESPN channels.

For $40 a month, you will already enjoy premium channels on YouTube TV. You can’t customize the channels and you only have one option, but ESPN channels are already included in this bundle.

If these live TV streaming platforms, Apple TV, UFC apps and waiting for replays on YouTube isn’t an option, see our list of free streams above one more time.

Find a UFC stream and get ready to rumble

There are so many ways to watch a UFC fight card, but if you’re going to use a free option be sure to protect your activities with a VPN. Not only will it protect you from the possibility of a DMCA notice, but it will also protect you from your ISP throttling your connection speed. Who wants buffering issues when someone is just about to deliver a knockout right hook? No one!