ExpressVPN vs IPVanish: Which VPN is Better?

ExpressVPN and IPVanish are two of the most popular VPN providers, and for good reasons. In fact, these two are among our top ten VPN providers. During our testing, we discovered a lot of important things about these two, which we shared on our reviews. In this face-off, we’ll provide a blow-by-blow comparison between ExpressVPN […]

ExpressVPN and IPVanish are two of the most popular VPN providers, and for good reasons. In fact, these two are among our top ten VPN providers. During our testing, we discovered a lot of important things about these two, which we shared on our reviews.

In this face-off, we’ll provide a blow-by-blow comparison between ExpressVPN and IPVanish, and find out which VPN provider is better.

IPVanish started in 2012 in the USA. The team behind the company―Highwinds Network Group―already had decades of experience in the field of technology. In 2017, Stackpath acquired Highlands Network Group, and IPVanish was part of the acquisition.

IPVanish started with only 32 servers and a Windows-only client software. Today, it has more than 1,100 servers in 60 countries and has clients for macOS, iOS, Android, and other operating systems. Aside from the large network of servers which gives users 40,000+ IP addresses, the strengths of IPVanish include: 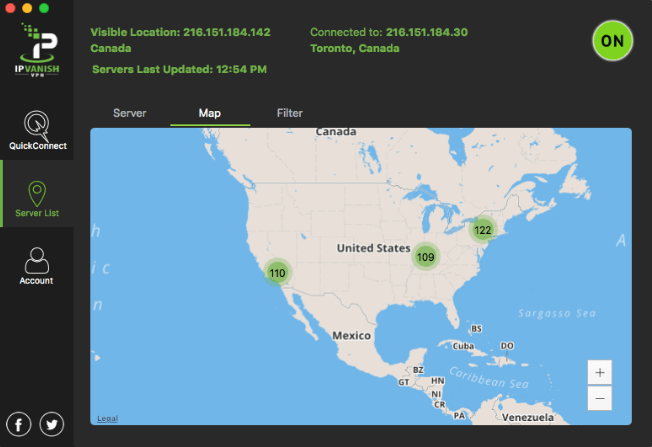 With the above strengths, it’s not surprising why IPVanish is a popular choice for a VPN provider.

However, the VPN provider’s logging policy came under fire once. According to a Reddit user, IPVanish furnished authorities with user logs in 2016 to aid in a criminal case investigation. However, the CEO of the new company who acquired IPVanish quickly addressed the issue:

ExpressVPN is a VPN based in the British Virgin Islands which started in 2009. It has more than 2,000 servers located in 94 countries worldwide. It has software clients for several operating systems like MacOS, iOS, Windows, Android, and Linux. ExpressVPN is one of the most popular VPN providers because of the following:

Thanks for considering ExpressVPN! We have industry-leading speeds, but for specific numbers you should try it out yourself. You can do so risk-free with our 30-day money-back guarantee. Do let us know if you have any further questions!

These strengths have made ExpressVPN one of the most popular VPNs in the market.

However, the provider’s user interface remains one of its weaknesses. It does not allow users to do advanced configurations, the main complaint of more advanced users. ExpressVPN is also more expensive than IPVanish and other VPN providers.

Knowing about each VPN provider’s strengths and weaknesses is all good, but it’s better to see a point-by-point comparison between ExpressVPN and IPVanish to know which one is better.

Speed is a major issue when it comes to VPN usage. However, there is a tradeoff between security and speed. VPN users who are after privacy and protection understand and accept this tradeoff. Of course, there is an acceptable degree of latency, which is why it’s important to compare the speed of different VPN providers.

Our tests revealed that IPVanish is faster than ExpressVPN in terms of ping and download speed. Here is the speed on the day of testing without any VPN:

When we connected to an IPVanish server located in the USA, below is the speed test result:

Here is the result when we connected to an ExpressVPN server in the US:

As you can see, IPVanish was able to surpass our ISP’s speed. This proves that with the right VPN, you can avoid ISP and government throttling.

A VPN provider that has too many downtimes is risky since abrupt disconnection from a VPN can cause IP leaks. Therefore, you have to make sure that your VPN provider has a high uptime.

IPVanish emerged as the winner once again. That’s because, with ExpressVPN, we experienced two downtimes. IPVanish had zero downtime during our month-long testing.

IPVanish has lower rates compared to ExpressVPN. The former even offers coupons for new customers. The regular rate of IPVanish is at $10 per month when you sign a month-to-month contract.

For both providers, you can save more if you sign up for their long-term packages. Still, for a one-year plan, IPVanish is cheaper at $6.49 per month, as opposed to ExpressVPN’s $8.32 price per month.

Aside from email and live chat, both VPN providers have FAQ pages, troubleshooting, and setup guides. However, IPVanish is more responsive both in email and live chat. As for ExpressVPN, we aren’t impressed by its live chat support. Responses look copied from a template, and the agents will only redirect you to the guides on their site.

ExpressVPN has more servers and server locations, with more than 3,000 servers in 160 locations in 94 countries.

On the other hand, IPVanish has over 1,200 servers in 60 countries.

ExpressVPN and IPVanish both use AES 256-bit keys as their encryption standard. The same standard is used by the US government and cannot be cracked even by a supercomputer.

IPVanish supports more VPN protocols, including the relatively new protocol IKEv2 which has auto-reconnect and multihoming capabilities. In contrast, ExpressVPN’s IKEv2 support is only limited to iOS devices. Both providers support OpenVPN.

We chose IPVanish as the winner here because it’s clear about its P2P policy. It also offers SOCKS5 proxy service which works well with any torrent software; ExpressVPN doesn’t offer SOCKS5.

If you only need to change your IP for an app (and you don't need #encryption) than our SOCKS5 #proxy might be just the thing: https://t.co/riE9Dpg5Zs pic.twitter.com/LaPaIXs6RQ

While both providers offer a 100% satisfaction guarantee, IPVanish only gives users seven days to decide. ExpressVPN’s term is for 30 days.

In terms of the number of allowed simultaneous connections, IPVanish is the clear winner. It allows up to 10 devices to connect simultaneously per account.

Want your entire household secured with a VPN? IPVanish provides 10 simultaneous connections, so you can encrypt all of your devices from one account. pic.twitter.com/9UuhIHdq38

On the other hand, ExpressVPN only allows three simultaneous connections per account.

ExpressVPN vs IPVanish: Which VPN wins?

While both providers in the ExpressVPN vs IPVanish comparison are great providers, the total tally is seven-to-two in favor of IPVanish. In this point-by-point comparison, we see that IPVanish is better than ExpressVPN for the following reasons:

We also like the fact that IPVanish is suitable for all types of VPN users, beginners and advanced users alike. The user interface is easy to use, but it can be customized as well. IPVanish is undoubtedly the number one VPN provider in our overall ranking and other subcategories. Check them out below: